A Slice of History – Pizza Where (They Say) it All Began

There are two things that Neapolitans all seem to be experts on: espresso and pizza. I have known people from Naples who brought their own tap water north to Italy’s fashion capital because they were convinced that it’s just not the same without their water.

The water idea is a bit overblown, but in the right place, I have tasted some of the best espresso in the world here (Bar Mexico in Piazza Garibaldi across from the main train station is one of the best http://wp.me/pfkhI-70 ). The real question is, can we really tell the difference between an excellent neapolitan pizza and a sublimely excellent neapolitan pizza? And if we cant’ get the best, is it really such a tragedy to settle for excellent?

For some people living under the shadow of Vesuvius, it is. Which is why they frown on Brandi.

Brandi, on a side street of via Chiaia, not far from the San Carlo opera house and the Royal Palace, claims to be the place that made the first pizza named for Queen Margaret of Savoy, Italy’s queen in 1889. The “pizza margherita” is pizza at it’s most basic and essential – dough, mozzarella, tomato sauce, a drop of oil and a few basil leaves to give it the three colors of the Italian flag. Choice ingredients are one of the reasons why it can be so good: buffalo mozzarella from the town of Aversa and tomatoes gown in soil embedded with volcanic ash from Vesuvius are a large part of it. The art of the the few pizzaioli (pizza-makers) who know the exact mixture of flour the best timing for the yeast according to the weather can take whole mix over the top to pizza heaven.

Pizza and fried antipasti at Brandi, Via chiaia

Brandi, despite the history, is not considered the pinnacle of pizzerie like olther famous places like Da Michele, Starita and Sorbillo by the pizza lovers I know here.

In fact, among many it’s reputation in town is not very good. It appears for years it rested on the laurels of history and the convenience of its location and forgot the pizza part. But other friends her have reminded me they got their act together and have talented pizza makers again.

Which is good because the last time my girls were in town with me we happened to be around the corner from Brandi in Piazza Plebiscito just when our sore feet and grumbling stomachs caught up to us. It was early – only 8 p.m. – so we were able to swing the impossible on a Saturday night: the last of the eight little tables outside on the street. We ordered a plate of fried antipasti and four Pizza Margheritas. The two old men singing and serenading the guests had the place as their official territory, making their presence more friendly and less imposing and, of course, we sang along. The atmosphere was both touristy and authentic, and above all fun.

Were we missing the best pizzas the world has to offer? Probably. But as we nibbled away at our our excellent pizzas in the cool evening air, we really didn’t care.

Pizzette in the Land of Pizzelle

I’ve been spending most of the last few months in Naples, the city that gave pizza it’s name and fame, so it would appear odd that I’m writing about Pescara’s pizzette first.
The reason is simple, pizzette on the Adriatic coast are a part of the landscape, and at least from Vasto to Pescara, Numana, and Rimini a couple of oven-fresh pizzette have been part of my life for at least 20 years. And my main focus here is not cooking, or food, but life in Italy through an edible lense.
Pescara’s pizza are very different from their bigger neapolitan cousins – they are breadier, crunchier, oilier, they come out of modern (not wood) ovens in individual pans fused together by the dozen like a primordial cupcake pan. What they have in common is an unspiced tomatoe sauce in which you can still taste the sun, and dashes of mozzarella in which you can savour traces of fresh cream. 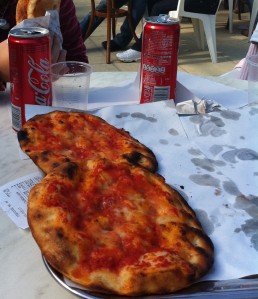 Until Pescara became our home, and not just a summer day-trip from L’Aquila, it’s unique pizzette were just a special prize after a relaxing post-afternoon swim. 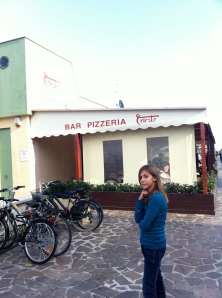 The Trieste beach concession is by far the town’s most famous pizzetteria in town and they seem to excel in keeping summer alive in our tummies and our minds as we pass from one season to another. At least three times in the last month, if the sun is shining on our faces as we were leaving Sunday mass or picking up the girls after school on Saturday* we would magically forget that lunch was waiting for us at home and we would instead steer our bikes down the beach to the river that cuts this city in two. Like donkeys insisting on a rest they would brake in front of Trieste. 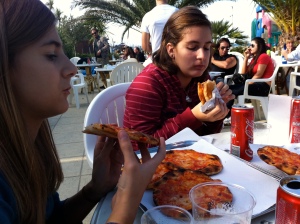 If it wasn’t for the long pants, coats and scarves it feels like it’s still Summer; the tables in front are full of people in sunglasses nibbling pizzette and watching their neighbors stroll by. In back it’s even more laid back, same sunglasses but they’re there to soak up what’s left of the afternoon sun. The plastic castles and mazes and swings are still mounted in the sand just behind, and the smaller clients are enjoying the giant plastic toys so much it makes me jealous.
One word of warning, I suspect that one of the secrets to Trieste’s pizzette is that they adhere to Henry Ford’s idea of customer satisfaction: you can have any pizzetta you want as long as it’s a margherita.** The menu does give other choices, basic white (foccaccia), white with sausage, anchovies, mushrooms, artichoke hearts, etc. Only the first two are real possibilities, but mostly in their inland evening joint in the Portanova dining and pub district.. 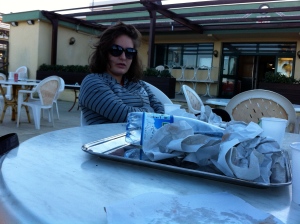 If you really do insiste on anchovies they will make it for you but be willing to wait a while. Except, of course,during the summer; when the beach umbrellas are in full bloom they will look at you like you’re from Mars as they prepare racks and racks of margheritas for the throngs in sunscreen and flip-flops.
Trieste, however, is not about choice, it’s about instant gratification. If you want variety you can choose between wine or beer, Fanta or Coke, still water or bubbly water.
And trust me, the only real choice you will want to make as November’s last rays beat upon your brow, is if you will be eating two, or three, or four…… 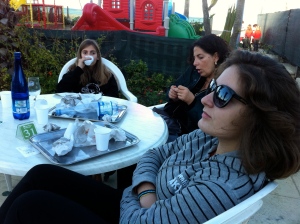 *In much of provincial Italy school goes from about 8 a.m. to 1 p.m., Monday through Saturday.
** Margheria = mozzarella and tomato sauce. Mr. Ford is famous for saying that his clients can have any color car they want as long as it was black.