Everyone has their comfort food. I have friends who zero in on the nearest pint of Haagen Dazs or Ben & Jerry’s ice cream. Growing up in Wisconsin my consolation for being dragged out to cross-country ski during saturday morning cartoons was a cup or two of hot chocolate with marshmallows.

One of the problems with some comfort foods is get they are not always there when you need them. Good pizza and quality draft beer need the right restaurants or pubs, ice cream needs a fridge, and hot chocolate needs something to heat it up.

Good Chocolate, be it Swiss chocolate, boeri and gianduia chocolates from Piedmont, or your favorite fix can do the trick, but then you risk falling afoul of the dark versus milk-chocolate debate…and why choose one when you can have them both?

As American pop-culture foods like colas, colorful breakfast cereals, corn chips (crisps!) and McDonalds spreads across the globe, an Italian multinational has been quietly spreading its comforting paste the other way….like a tasty plague.

With Nutella, you don’t need anything tools or instruments to reduce depression whilst widening your waistline; if your fingers are clean not even a spoon is needed (and like chocolate-covered pretzels a little bit of salt makes it more savory).

And there are more benefits. It doesn’t melt like ice-cream but you can mix it with your favorite gelato (or even use it to correct the bad stuff), and if a stretch you can place a dollop in your steaming-hot espresso for a double pick-me-up.

But the best part of Nutella is that you can keep a jar hidden away for emergencies….like being snowed-in like we are today, or after an unpleasant Superbowl game.

Just reached for the jar…and a spoon! 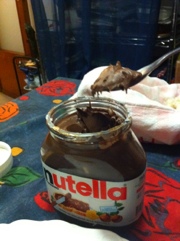 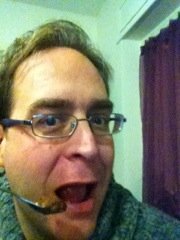 Nutella Day was founded by the great people behind Bleeding Espresso

Bad Crêpes and Beauties in Berets

Cheap on the Nutella leaves Paris crêpes a little flat.

When I was growing up Nutella was almost impossible to find the U.S.A, at least it had not yet arrived in the upper Midwest. The stories of Nutella that my friends who had spent time in Europe mad this mysterious chocolate paste seem larger than life.
Legend, fortunately, is often based on fact. And the fact is that this creamy paste made of blended sugar, chocolate powder, hazel nuts, vegetable oil and powdered milk is hard to resist. They sell it as breakfast food – advertised in Europe much as cornflakes are advertised in America – as part of a balanced breakfast for children and athletes. You can also find it in deserts, cakes, as a pizza topping and any other way you can imagine.

Its versatility makes it all he more dangerous. Especially since all you really need is a spoon or, even better, your finger. The saltiness adds an earthy accent to it’s flavor (try it on salted crackers or a pretzel if you want, or any way your naughty little mind imagines). Late night snacking and a few more ounces of body fare are only a jar twist away – but at least you’ll sleep with contented grin.
Another legend back then was that the crêpes you bought in the streets of Paris were the best in the world. This might have been true in the 80’s, but this Summer my Nutella crêpe devouring daughters were not thrilled to discover that street vendors in Pescara, Rome or L’Aquila (even post-earthquake) make better Nutella crêpes than the dozen we tried all over Paris.

Emily in Paris (the Crepe Revolutionary)

There are two reasons for this. First, to save time very few of them will whip them up from batter to crêpe in front of you – they will try to throw a pre-made one on before you can protest (if they even have any fresh batter left). And half of the joy is the texture and crisp doughy warmth of a freshly formed and folded crêpe.
The other half is how much Nutella is used and how it is spread along the almost cooked crêpe. Of course purists would say that Nutella came after the legend – and they can be tasty with chocolate syrup, marmalade or just powdered sugar. But Nutella has a habit of nudging aside tradition and grabbing your attention. 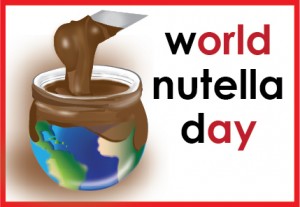 Our street vendors in L’Aquila not only pour the mixture on the hot plate in front of you, adding to the wonder as the simplest ingredients evolve before you eyes, but they spread on the Nutella before the first fold so that there are more layers alternation from pastry to Nutella and back. In Paris the spreading only occurs when it is already folded in half. Only the vendor on the side of the church of Saint-Germain-des-Prés kept to the script on freshly poured, half moon crêpe building (but he was cheap on the Nutella).

Fortunately there is much more to Paris than a loss of respect for visiting crêpe-eaters, so a few touristy purchases of berets and postcards or an improvised musical puppet show on the Metrò later and the disappointment would fade away.
Besides, there was a jar waiting for us when we got home.